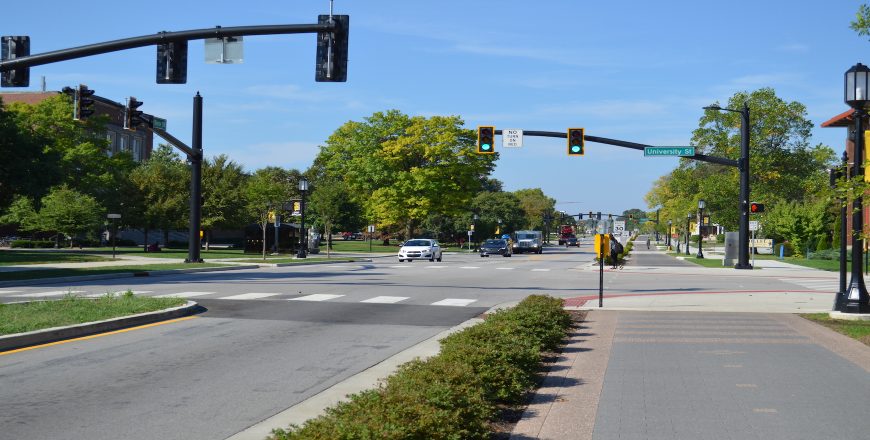 Jury Comments
“could have easily gone with a one-size-fits-all approach, but they integrated the landscape with the architecture . . . required truly integrated planning and utilized a diverse delivery method (P3) . . . truly impactful intervention”

This project took the aspirations of a university, a city, and a community and embodied that transformational potential to create a functional infrastructure and a destination. Partnering with the City of West Lafayette, the project transformed State Street, the primary east-west thoroughfare through Purdue’s campus, from a former state highway into a destination that activated local economic growth and safety enhancements, and supported developments that provide enhanced research and educational opportunities for students.

The project improved campus mobility and safety by decreasing street widths, providing over 20,000 linear feet of dedicated cycle tracks and shared use paths, adding over 33,000 linear feet of new landscaping, and adding or modifying 17 traffic signals. The conversion of one-way streets to two-way simplified the transportation network, and roundabouts were constructed to help with circulation. Bus pull-off locations were added in high-traffic areas where stopped buses previously held up other vehicular traffic, and some bus stops were relocated to less congested areas.

The use of a P3 delivery method is one of the most unique aspects of the project and offered significant opportunities to save time and money that are not available using a more traditional approach. It resulted in faster project completion by giving the private sector opportunities to innovate and offer ideas for saving money, both in terms of project design and project execution.

Cycle tracks, made of high quality clay pavers, in addition to the new multi-use paths, help increase connectivity to the university’s northwest athletic sites, the U.S. 231 trail system, and across the river to Lafayette. Walkability improved, and gathering spaces were added to help create a sense of place. The transformation of State Street has helped remove the divide between the city and the university and also between the north and south halves of campus. The project
also helped catalyze over $500 million in local economic investments to date, including Campus Edge, Schweitzer Engineering Laboratories, The Rise, and the advancement of the Discovery Park District, with more currently underway. These resulting projects are advancing the university’s core strategic goals, known as Purdue Moves, by creating new research opportunities, additional housing for increased student enrollment, and exciting new live, work, and play attractions for faculty and staff.