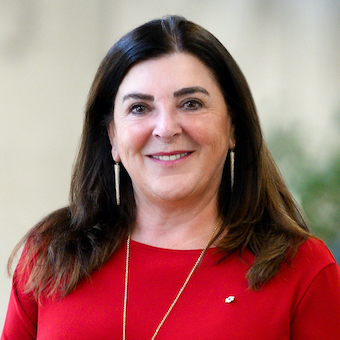 Dr. Vianne Timmons, OC, became the 13th president and vice-chancellor of Memorial at the beginning of April 2020, coming from the University of Regina where she had served as president since 2008 and oversaw the successful implementation of two institutional strategic plans.

Dr. Timmons grew up in Labrador City as one of six children and moved to Nova Scotia during high school. She holds a BA (Mt. Allison), B.Ed. (Acadia), M.Ed. (Gonzaga) and PhD (Calgary).

A teacher by training, she maintains a wide-ranging research program emphasizing family literacy and inclusive education. Her credits include nine books, 12 book chapters, 40 peer-reviewed articles, 30+ funded research projects (as principal or co-investigator), and more than 200 invited lectures.
She has received numerous awards, including Officer of the Order of Canada in 2017, and the 2019 YWCA Women of Distinction Lifetime Achievement Award. She was also named one of Canada’s Top 100 Most Powerful Women on four occasions.

Dr. Timmons has served various post-secondary and other organizations, including as member of Senior Women Administrators of Canada, the Canadian Society for the Study of Education, Business/Higher Education Roundtable and Canadian Foundation for Innovation. She also chaired Universities Canada International Committee and the Canadian Bureau of International Education.