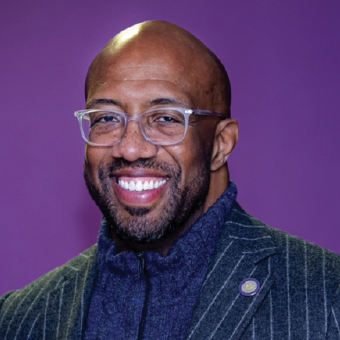 Dr. Michael J. Sorrell is the longest-serving president in the 148-year history of Paul Quinn College. During his near 14 years of leadership, Paul Quinn has become a nationally regarded institution for its efforts to remake higher education in order to serve the needs of under-resourced students and their communities.

Included among Paul Quinn’s numerous accomplishments during Sorrell’s tenure are the following: winning the HBCU of the Year, HBCU Student Government Association of the Year, and HBCU Business Program of the Year awards; achieving recognition as a member of the President’s Higher Education Community Service Honor Roll; creating the New Urban College Model; demolishing 15 abandoned campus buildings; partnering with PepsiCo to transform the football field into the WE over Me Farm; achieving full accreditation from the Transnational Association of Christian Colleges and Schools (TRACS); creating the College’s first faculty-led study abroad program; and rewriting all institutional fundraising records.

Sorrell is one of the most decorated college presidents in America. Recently, President George W. Bush and the George W. Bush Presidential Center awarded him the Bush Institute Trailblazer Citation. He has been named one of the World’s 50 Greatest Leaders by Fortune Magazine; is the only three-time recipient of the HBCU Male President of the Year Award (2018, 2016 and 2012); won Higher Education’s President of the Year award as named by Education Dive; and Time Magazine listed him as one of the “31 People Changing the South.” Washington Monthly Magazine identified him as one of America’s 10 Most Innovative College Presidents and Rev. Jesse Jackson, Sr. and PUSH/Excel honored him with its Education Leadership Award. Michael is the recipient of both the Dallas Bar Association’s Dr. Martin Luther King, Jr. Justice Award and the City of Dallas’ Father of the Year Award. In addition to being a member of the “Root 100” (a list of the top 100 emerging leaders in America) by the Root Online Magazine, Michael has received: the Distinguished Alumni Award from Duke University, the University of Pennsylvania’s Graduate School of Education, and St. Ignatius College Prep in Chicago, Illinois; the A. Kenneth Pye Award for Excellence in Education from Duke University’s School of Law Alumni Association; the Social Innovator Award from Babson College; the Vision Award, Center for Social Entrepreneurship, Middlebury College; Luminary Award from SMU; and the TRACS Leadership Award. The Dallas Historical Society honored Michael for Excellence in Educational Administration. He is a past recipient of the Dallas Urban League’s Torch for Community Leadership and both the President’s and C.B. Bunkley Awards from J.L. Turner for his outstanding contributions to the Dallas legal community. Michael also has an honorary degree from Austin College.

Sorrell received his J.D. and M.A. in Public Policy from Duke University and his Ed.D. from the university of Pennsylvania (where his dissertation defense was awarded “with Distinction”). While in law school, he was one of the founding members of the Journal of Gender Law & Policy and served as the Vice President of the Duke Bar Association. Sorrell was a recipient of a Sloan Foundation Graduate Fellowship, which funded his studies at both Harvard University’s Kennedy School of Government (as a graduate fellow) and Duke University. He graduated from Oberlin College with a B.A. in Government, served as secretary-treasurer of his senior class, was a two-time captain of the men’s varsity basketball team, and graduated as the school’s fifth all-time leading scorer.

Among the entities that Sorrell serves as a trustee or director for are Duke University’s School of Law, the Graduate School of Education at the University of Pennsylvania, JP Morgan Chase’s Advancing Black Pathways, Amegy Bank, the Hockaday School, the Dallas Advisory Board of Teach for America, the Dallas Foundation, and EarthX.

Sorrell is married to the former Natalie Jenkins. Natalie is an alumna of Spelman College and the Wharton School at the University of Pennsylvania. They have two wonderful children, Michael Augustus and Sage Louise-Sinclair.