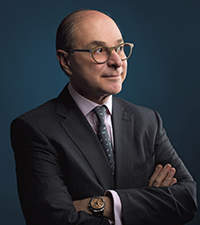 Joseph E. Aoun, a well-known higher education thought leader and renowned scholar in linguistics, is the seventh President of Northeastern University. An internationally respected voice on the value of global and experiential education, President Aoun has led the expansion of experiential learning—centered on Northeastern’s signature co-op program—to offer opportunities for work, research, service, and global study in 136 countries.

Northeastern has also established a network of six campuses in the U.S., Canada, and the United Kingdom, as part of the president’s vision for a global university system that will expand opportunities for lifelong learning and collaborative research.

As a result of these and other initiatives created during the president’s tenure, Northeastern has attracted record numbers of high-talent students, while external awards for research have more than tripled.

President Aoun is the author of numerous articles and books, including Robot-Proof: Higher Education in the Age of Artificial Intelligence (MIT Press, 2017). In it, he confronts the need for colleges and universities to reimagine education in the face of increasingly smart machines.

He came to Northeastern from the University of Southern California’s College of Letters, Arts & Sciences, where he was the inaugural holder of the Anna H. Bing Dean’s Chair. He received his PhD in linguistics and philosophy from the Massachusetts Institute of Technology and advanced degrees from the University of Paris VIII and Saint Joseph University in Beirut, Lebanon.