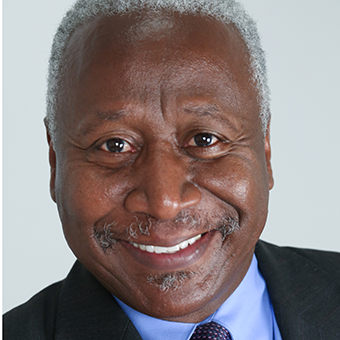 South Carolina State University’s 12th President, Mr. James E. Clark, is a native of Quincy, Florida. Referring to his parents as “two of the smartest people I know,” they instilled in him the value of a good education, hard work, and discipline. His father Edmond had a second-grade education and his mother Annie, a sixth-grade education, but they wanted more for Clark and his siblings. His father became his first role model as a well-respected businessman within the farming community, and Clark followed in his footsteps, with expanded opportunities he could have only imagined.

An accomplished visionary with a stellar career, Clark brings to the presidency a results-oriented business approach that launches and drives positive outcomes. His proven experiences in leading Fortune 5-500 companies have prepared him to provide the leadership necessary to move SC State University to the next level. Clark firmly believes that the solid business practices of the institution are critical to its operations, success, and brand enhancement.

A resident of Columbia, SC, Clark has served as vice president of a $1-billion division of AT&T which, he converted from a money-losing division into the most profitable division in AT&T’s computer business. While at AT&T, he also served as an Executive Director of the prestigious Bell Lab, the most respected research institution in the world at the time.

Clark also performed strategic planning, product management, product marketing, and software development at Gould Incorporated, General Electric, Gillette, and Exxon International. He brings a wealth of expertise as a successful relationship builder, mentor, and team motivator to SC State. Clark has been noted and respected for his ability to develop consensus among diverse functional groups.

Clark served on the Benedict College Board of Trustees for 18 years. He has also served as an SC State Board member. He chaired the University of South Carolina Research Foundation Board for three terms and served on numerous other boards and councils over the years.

Clark now serves as a Board member of the recently announced Battelle Savannah River Alliance (BSRA), charged with oversight of the Savannah River National Laboratory, the first time for such a position at a DOE managed national laboratory for an HBCU president. And most recently, Clark has become Chairman of the Mid-Eastern Athletic Conference (MEAC) Council of CEO’s.

Along with his passion for education, Clark has a passion for building and flying aircraft. He is an active member of the Experimental Aircraft Association (EAA) Board of Directors and has performed as an Air Show Performer. An engineer and a pilot, Clark brings the intricacy of “attention to detail” and the critical aspect of its effect on success.