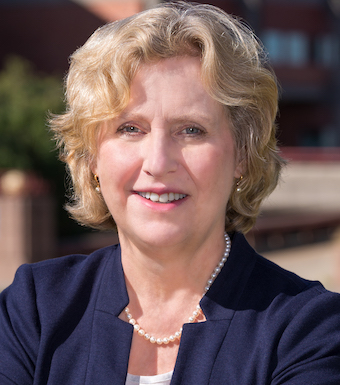 Elizabeth (Betsy) Hendrey is the Provost and Vice President for Academic Affairs at Queens College, CUNY.  She oversees all academic departments and programs, the Office of Research and Sponsored Programs, Experiential Education, the Center for Teaching and Learning, the Center for Ethnic, Racial and Religious Understanding, the Center for Career Engagement, as well as the College’s global initiatives, including Study Abroad and International Students and Scholars.  She led the effort to bring Navitas, a global higher education organization that partners with universities to increase international students’ access to higher education, to campus to institute an international student success program to be inaugurated in 2020, the first partnership with Navitas in New York. She serves on the American Council on Education’s Commission for Internationalization and Global Engagement. She leads the College’s accreditation efforts, most recently its successful reaccreditation as part of a select group of 15 colleges and universities which piloted the new MSCHE standards. Her office oversees a variety of strategic initiatives and projects, including a $5m, 5-year HSI-STEM grant from the US Department of Education.  In 2012-3 she served as Chief Operating Officer and Vice President for Strategic Planning and Enrollment Management, overseeing Finance and Budget, Human Resources, Public Safety as well as all of the enrollment management areas and international programs. Prior to this, she was the Dean of Social Sciences at Queens College from 2005-2012, after serving for three years as chair of the Economics Department. Under her leadership, the college developed degrees in finance, international business and actuarial studies, and an interdisciplinary graduate program in risk management. Hendrey attended Princeton University as an undergraduate, majoring in economics, and earned her Ph.D. in economics at Duke University in 1985.  She joined the faculty at Queens in 1989, rising to full professor in 2001, and is also a member of the doctoral faculty at the CUNY Graduate Center. Her research interests are in economic history and labor economics. In 2010 she was named one of the Queens Top Ten Women in Business. She was an American Council on Education Fellow at Lehigh University in 2010-11, where she focused on strategic planning and plan implementation.