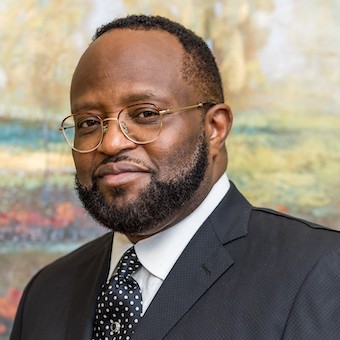 David A. Sanders serves as the President of the new Malcolm X College and School of Health Sciences. He formerly served as Deputy Chief Operating Officer for City Colleges of Chicago. He has also served as a Project Team Leader with the Reinvention initiative and as the Auxiliary Services Director for Kennedy King College.

As the President of the new Malcolm X College (MXC), Mr. Sanders is responsible for over 12,000 students, nearly 1,000 employees and a $40M+ budget.  He is charged with the overall vision, mission and operations of the college as well as developing and implementing a Strategic, Enrollment Management and Equity plan for the college, which includes the development, accreditation, management and control of 26 health science programs; 11 of which are accredited.  Since his appointment in 2015, President Sanders has:

Mr. Sanders holds a Bachelor’s degree in Finance from DePaul University, Chicago, IL and a Master’s in Educational Leadership from Concordia University and is expected to complete his doctorate in Educational Leadership from Concordia University Chicago in 2021. A dedicated and committed Christian man, Mr. Sanders serves his national, state and local church in a variety of leadership capacities and is known for his faith, humility, liberality, patience, strength and dogmatic determination.

Married to the former Felicia R. Hooker, Mr. Sanders is a dedicated father of three and grandfather of four.  He and his wife reside in Chicago, IL.