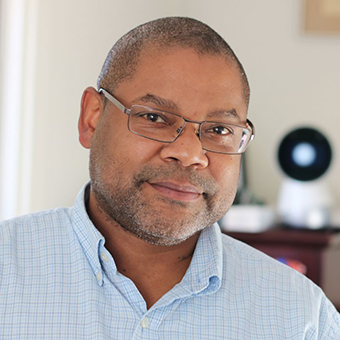 Last year, when he was a professor of information sciences and senior associate dean for academic affairs at Drexel University, Smith and colleagues trained Philadelphia middle school teachers and students in coding and game design. Eventually, the students—many of them young women of color—designed video games and projected them onto the exterior of downtown Philly’s 29-story Cira Centre office tower.

The skyscraper experiment was just one of many computer-based learning environments Smith has worked on or overseen in his top teaching and administrative roles at Drexel, MIT, the National Science Foundation, the Rhode Island School of Design, and elsewhere. He’s designed interactive experiences that teach children nutrition concepts; educated university students in parallel programming skills; and helped people with diabetes monitor and manage their conditions, to name a few.

Next year, Smith will begin teaching in and co-directing the Lynch School’s new M.A. program in Learning Engineering, which prepares educators to design and use learning environments. Smith explains: “It’s taking what we know from the science of learning—the good, fundamental research, a lot of which is coming out of the Lynch School—and, as a designer, using that to build new platforms, new curricula, museum exhibits, after-school programs, and corporate skills trainings.”

The new program is one of the things that drew Smith to the Heights, along with Boston College’s emphasis on formative education. “BC’s always been about social justice,” says Smith, who recently spoke with the first cohort of learning engineering graduates. He was pleased to find that they were landing jobs. But more than that, he said, “It’s obvious they’re doing this because they want to make a difference, no matter how big or small—helping people, period.”