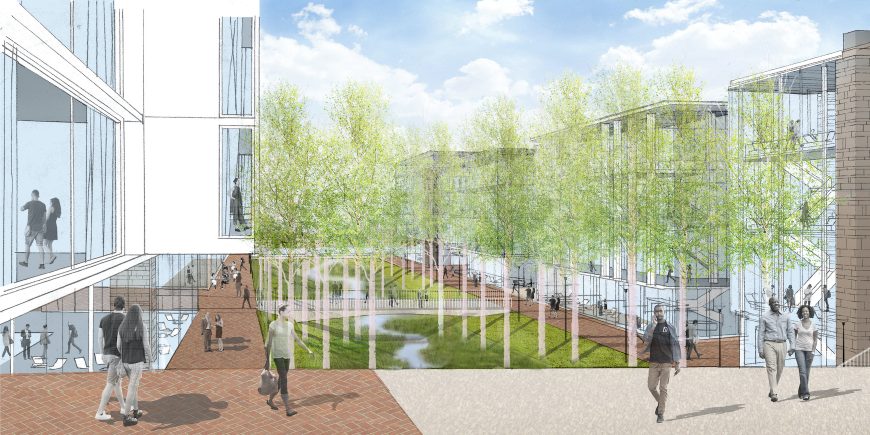 Jury Comments
“ like the merging of civic space and water management . . . new connectivity and identity is quite successful . . . it makes a bold plan for a downtrodden area that will make it a valuable asset for the campus and the community ”

This strategic 14-acre parcel presides at the junction of three important but distinct areas of the UVA campus: Central, North, and Arts Grounds. The significance of this location at the crossroads of Emmet Street and Ivy Road as a “gateway” to UVA had been recognized for over 40 years. Uses on the site were post WWII retail and commercial, a 1200-car parking garage, a remnant forest, and a partially open and buried stream. This project presents a great opportunity to extend the UVA Central Grounds legacy of thoughtful compact academic community with a clear organizing idea.

Post WW II, before UVA purchase, the original forest had been removed and the land leveled for incremental building development, both on site and upstream in the watershed. The stream was put in pipes or open engineered channels. The central idea to the entire district is the multi-faceted solution to local hydrology. The stepped stream channel would be restored and planted with groves of birch and ground cover species able to be periodically submerged. Downstream, the pond would detain various storm events utilizing both the pond and the entire upstream channel, preventing historic off-site flooding. Outflow from the pond would exit the site beneath the abutting street and daylight again in an open, improved downstream channel. This idea of a bold regeneration of a piedmont forest and stepped stream ecology to anchor this new academic district offers a stunning opportunity for transformation and a distinct sense of place.

Like the Lawn at the heart of Thomas Jefferson’s original plan for the Academical Village, located about one-half mile from the Ivy Corridor, the plan organizes the building program around a linear open green. This green at the Emmet-Ivy intersection is a gesture of openness and welcome to the larger community, a contrast to the introverted nature of the original historic core. The landscape plan creates a generous interior civic space, with a wide pedestrian promenade and more intimate “porches” overlooking the stream, which serves as the central organizing identity and creates maximum high-value program frontage along the parcel’s entire interior.

Poor street and utility quality, lack of pedestrian and bicycle connections, and overhead utilities were primary issues for the City of Charlottesville and UVA. A two-fold effort has gone into insuring a win-win outcome and sense of common purpose. First, the Emmet Street VDOT Smartscale work and Ivy Road Public Realm improvements are a joint effort to envision a distinctive entry environment with an integrated system of underground utilities, street trees, street lighting, and pedestrian, bicycle, and transit stops. Second, with the district’s open space idea, the university eliminated historic district flooding and placed a major civic space at the key intersection.