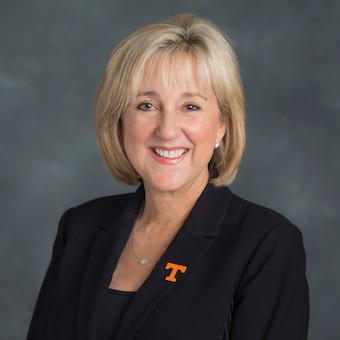 Donde Plowman became the ninth chancellor of the University of Tennessee, Knoxville, on July 1, 2019.

She returned to Rocky Top after nine years at the University of Nebraska—Lincoln, where she served most recently as executive vice chancellor and chief academic officer. In that role, she oversaw academic affairs, student affairs, the Office of Research Economic Development, and the Office of Diversity and Inclusion. She earlier served for more than six years as the James Jr. and Susan Stuart Dean of the College of Business Administration at the University of Nebraska–Lincoln.

Before going to Nebraska, Plowman was on the management faculty at UT, where she served for two years as head of the Department of Management in the Haslam College of Business. She began her academic career at the University of Texas at San Antonio as an assistant professor of management and advanced to the position of professor and associate dean for graduate studies and research, where she was responsible for the creation of the university’s doctoral degree in business.

Plowman has a doctorate in strategic management from the University of Texas at Austin, an undergraduate degree with a major in English from Southern Methodist University, and an MEd in higher education administration from the University of North Texas. Authoring over 60 publications, Plowman’s research has focused on leadership, emergent change, and decision making.

Plowman is married to Dennis Duchon, professor emeritus from University of Nebraska Lincoln, where he previously served as professor of management and department chair.